River tourism between the Loire and Garonne From Angoulême to the Atlantic Ocean, through the vineyards of Cognac, between the Loire and the Garonne, Charente flows gently to the ocean. The Charente is also the country of Cognac and Pineau. Visit the winery distillation and aging will reveal all the secrets of these liqueurs Gods. The green valleys are lined with Renaissance castles and Romanesque churches, many wonders to discover during your stay ...

Cognac: the marina, more functional and welcoming, is located in the heart of the city and ideally meets the needs of boaters. A path maintained hauling allows the discovery of heritage, fauna and flora, walking and cycling.

Right bank of the Charente: St Jacques area offers a multitude of shops and a large outdoor market on Saturday morning. Anecdote: pilgrims en route to St Jacques de Compostela were once step in this neighborhood.
Left bank of the Charente: Cognac full of old medieval architectural treasures including the imposing castle of Valois, the birthplace of François 1er; the St Jacques towers; House of the Lieutenancy

TO SEE: Wineries Pineau and Cognac, Saintes and its Roman remains, Bourg Charente and his canoe, Jarnac, city Mitterrand, Angouleme capital of the comic strip.
A taste: "cougnat" (cognac), Pineau des Charentes, the capon Barbezieux, the snails (snails), the Manslois (cheese), and Kroumirs cornuelles (pastry).
To know: the Charente region also known as "land of a thousand rivers" once had 800 mills, some of which have been converted into a museum.
FAVORITE: the National Center of comics and picture Angoulême 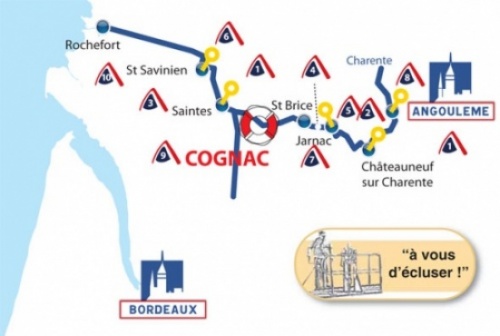